CRA: The Biggest Lie and Scam in World History

The following article was sent to us anonymously from individuals whom are well-researched on the matter. We have chosen to re-post it without warranty or assuming any liability whatsoever. It is not offered as legal advice but as research material to the open-minded.

CRA - probably the three most frightening letters in the English language. This deep-seated fear and loathing serve a very specific purpose; it serves to keep the People of Canada in submission to an illusion, a lie.

The CRA has a horrible reputation and has earned every bit of it, has by their admissions committed crimes against innocent Citizens, and continues today to be the “Gestapo” of Canada. They confiscate more homes, destroy more families, take more money, ruin more lives, and commit more crimes than all the street gangs combined. They are indeed vivid proof that the greatest threat we face, as a nation, is our own Federal "Government." [You as a Private individual are: Canada’s Last Hope].

The CRA is formerly the Bureau of Internal Revenue (BIR) situated in and with authority only in the Philippine Islands (Trust Fund # 61), and moved into Puerto Rico (Trust Fund # 62). In the 1950’s, with the stroke of the pen, the BIR was transformed into the current notorious CRA and brought onto the 10 Canadian Provinces. This was done without any Legislative authority whatsoever. There is no Legislative authority for the CRA to exist and operate in the 10 Canadian Provinces recorded anywhere in any law-books. Again, keep in mind, that the CRA is the “Private, debt collection agency for the private banking system known as the Bank of Canada”.

A Criminal Code Violation is incredibly serious. However, both the CRA agent and the Bailiff count on the abysmal ignorance of the Citizen who has no idea what their Lawful Rights are. Bear this point in mind, if the CRA agent has no authority to seize any property at all, then they cannot delegate or confer to the Bailiff what they themselves do not have. In addition, the Bailiff has no idea that he has engaged in a serious crime. Here is where the maxim applies, "Ignorance of the law, is no excuse for violating the law." Both the CRA agent and the Bailiff should be arrested and charged with Conversion of property, a Criminal Code Violation.

Tyranny is defined as: Dominance through threat of punishment and violence, oppressive rule, abusive government, cruelty and injustice. What better definition than this fits the abusive CRA?

The Bank of Canada system is not a Federal government agency, there are not “reserves” and there is no real money. The Bank of Canada system is a private cartel that has usurped the authority of the Legislation to coin Money. Federal Reserve Notes are just as worthless or just as valuable as Monopoly Money used in the game “Monopoly”. If we go to this Constitution Act of Canada, we find that only the Legislation was given the authority “To coin money, regulate the Value thereof, and of foreign Coin, and fix the Standard of Weights and Measures”.

This authority given to the Legislation by this Constitution Act of the Canada was not to be delegated to any private corporation for that corporation’s private gain.

For anyone that has ever dealt with a debt collection agency, you know how nasty, mean and dirty they can be. Now, take that nastiness, that meanness and dirtiness and multiply it one hundred-fold; there you have the attitude of the CRA.

Let’s continue down the Rabbit Hole. When a Canadian Citizen gets into a dispute with the CRA, the CRA agent will not listen to any of your pleadings, your begging or your excuses. Everything you do or say amounts to nothing with the CRA. If you dig in your heels and refuse to pay, the CRA starts sending you threatening letters with dire consequences for your non-cooperation.

If you still refuse to pay, the CRA will file a document called a “Notice of Federal Tax Lien” in the local Court Clerk’s office. This is a very deceptive document. Keep one thing in mind a “Notice” is NOT the “Lien” itself. The “Lien” is a totally separate and distinct document from the “Notice”. The Court Clerk, through abysmal ignorance files the “Notice of Federal Tax Lien” as if it was an actual “Lien”. These are two separate and distinct documents. The Court Clerk never requests the actual “Lien” from the CRA agent. If they were to request this document, the CRA agent would get very irate and threaten the Court Clerk for their non-cooperation. Of course, the actual “Lien” does not exist anywhere in the known Universe.

There is one more lawful requirement that the Court Clerk must comply with before they can file the “Notice of Federal Tax Lien” or the actual “Lien” itself. The Federal Lien Registration Act requires “Certification” of the “Lien” itself. This would require that the CRA agent file an Affidavit wherein they identify themselves, and state under Oath that there is an actual “Lien” filed based on an actual assessment on form T4SUM against the particular Canadian Citizen.

When the Court Clerk fails to verify “Certification” they violate the lawful requirements of the Federal Lien Registration Act.

The CRA never files the actual “Lien” because it does not exist! An actual “Lien” must be based on a lawful assessment on form T4SUM. In the entire history of the CRA, the CRA has never produced a form T4SUM showing an individual assessment against a Canadian Citizen.

This so-called “Notice of Federal Tax Lien” is an act of “Financial Terrorism” because once this “Notice” is filed, you become a pariah, a financial outcast, you are branded as unfit, you are no longer a “good slave”, you are a rebel beyond the hope of redemption. Your slave “Credit Rating” takes a nosedive. You are practically ruined financially.

Interestingly, Section 803 of the so-called PATRIOT ACT of the United States defines terrorism as “any act intended to coerce or threaten a civilian population”. So, by the very definition of “Terrorism”, the CRA is the largest, meanest, dirtiest, Terrorist Organization in the entire world.

There are several things wrong with these two scenarios. Both the bank and your employer fail to verify several key pieces of information in dealing with the CRA agent.

First, they fail to ask for a copy of the CRA agent’s driver’s license to verify that in fact they are who they say they are. Also, in case, the CRA agent has to be served with legal process, they can be located. All CRA agents have been given instructions to never provide this information to any one asking for it. Thus, the true identity of the CRA agent is never established. Pretty convenient, huh!

The other “Identity Card” is what is called “Enforcement”. The word “Enforcement” might convey the message that this CRA agent actually has unlimited authority to “Enforce” something against Canadian Citizens. That is not the case at all. They have an extremely limited scope of authority. In fact, they cannot enforce anything against Canadian Citizens.

Both the bank and your employer fail to request a copy of the “Identity Card” from the CRA agent in order to establish the authority of the CRA agent. I am fairly confident that all agents that send out notices to banks and employers have an “Administrative Identity Card”. Thus, both your bank and your employer steal your money and send it to a Terrorist Agency known as the CRA.

Thirdly, the bank and your employer fail to request a copy of the actual assessment on form T4SUM. Again, never in the history of this country has a Canadian Citizen been assessed an Income Tax on a form T4SUM. Without this so-called assessment on this specific form, form T4SUM, there is, no debt. So, the bank and your employer fail to verify this alleged debt and thus, steal your money.

Fourth, the bank and your employer fail to request of copy of the “Abstract of the Court Judgment”. This document would show that you were actually sued by the CRA and that you had your day in court. The Constitution Act for Canada guarantees you the Right of Trial by Jury in any controversy where the amount shall exceed twenty dollars. Of course, you were never sued, and you never had your day in court. Thus, your Due Process of Law Rights are totally violated and again, you are further enslaved to the Bank of Canada.

So then, we come to the end of the Rabbit Hole. You have never owed any money to the CRA. The CRA is simply the enforcer, the debt collector for the Bank of Canada System. However, because you are using a private credit system, wherein the medium of exchange are fancy pieces of paper called Bank of Canada Notes, you owe the Bank of Canada a “user fee”.

All the current paycheck garnishments in the entire country could be stopped by having your employer request the above-mentioned documents, to wit:

To learn more about this revealing information, whether it applies to you, and how to enforce your rights as afforded you under the Canada Act, contact us directly. We can put you in touch with an advisor for an assessment. 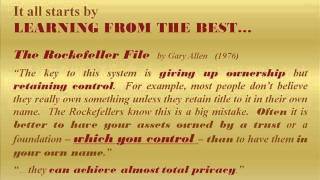